The Eurolife Distinguished Lecture Series (EDLS) offer a platform for inviting distinguished researchers from other Eurolife Universities to present cutting-edge research at one host Eurolife University. The design of the Series also allows an active dialogue between lecturers, researchers and students and foster awareness and branding in partner institutions. The topics of the lectures cover Eurolife key research areas: neuroscience, imaging, cancer, cardiovascular diseases, inflammation, genetics of complex diseases and international health among them.

Prof. Argyris Papantonis, Professor of Translational Epigenetics, University Medical Center Göttingen (UMG), Germany becomes the 29th scientist to be awarded the title of Eurolife Distinguished Lecturer. The lecture of Prof. Papantonis, titled: Multiscale chromatin reorganization in the context of ageing was held on 3. December 2019 on the occassion of the Eurolife Lecture Series organised […] 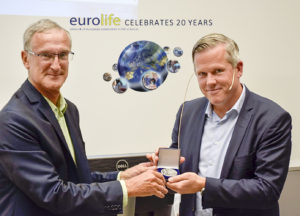 On 11 July 2019, Prof. Christian Giske from Karolinska Institutet, Stockholm was presented with the Eurolife medal, following his Eurolife Distinguished Lecture on antimicrobial resistance. The medal was presented by Prof. Dr. E.J. (Ed) Kuijper, LUMC. The lecture was held on the occassion of the Eurolife Summer School titled: Immune modulation in human and animal […] 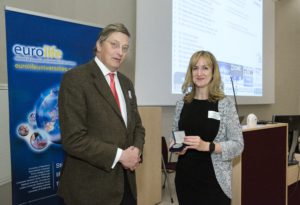 On 23 May 2019, Eurolife Network Members, guests and academic speakers gathered together to celebrate the 20th anniversary of the Network. To mark this special occassion, the Leiden University Medical Center (LUMC) hosted the Eurolife Mini Symposium on Research Innovations in Oncology with the honorary scientific guest, Prof. Dr. Lorrain O’Driscoll from the School of […] 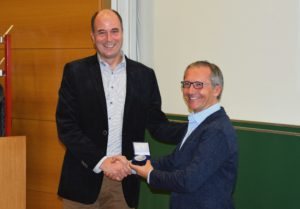 The Eurolife Distinguished Lecture of Prof. Sjoerd van der Burg was the draw of this year’s Eurolife Autumn Symposium, hosted by the Medical Univesity of Innsbruck. The Symposium, titled Therapeutic Vaccines for Cancer welcomed presentations from renowned academics from the Medical University of Innsbruck and the Leiden University Medical Center and offered insights into cutting-edge […]