Dr. Pancras Hogendoorn is a professor of pathology, member of the Board of Directors and the Dean of the Leiden University Medical Center, The Netherlands. His collaboration with Semmelweis University goes back 15 years and originated from nemorous joint scientific papers published in the field of bone and soft tissue tumours. The honorary doctorate awarded to Prof. Hogendoorn is an expression of Semmelweis University’s acknowledgement and recognition of the degree of Pancras’s contribution to understanding the molecular mechanisms behind the development of bone and soft tissue tumors, as well as his efforts to disseminate the research results internationally in WHO classifications, postgraduate education and partnerships, including research consortia and clinical trials.

The presentation of this honorary doctorate was part of the festivities dedicated to commemorating the 250th anniversary of Semmelweis University in November 2019. 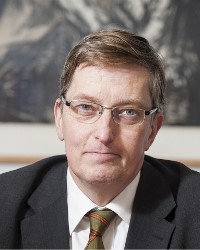 Pancras C.W. Hogendoorn absolved Medical School and his doctoral research at Leiden University. The title of his doctoral thesis (1990) reads ‘Immunopathogenetic mechanisms in experimental glomerulonephritis’. Subsequently Prof. Hogendoorn further specialised in oncologic pathology at the Netherlands Cancer Institute (NKI) in Amsterdam and the Memorial Sloan Kettering Cancer Center in New York. In March 1999 he was appointed Professor in Pathology of the Leiden University Medical Center. The title of his inaugural lecture was ‘Form Follows Function’.

For more than 25 years, Prof. Hogendoorn has carried out research into molecular pathogenesis and diagnostics of bone and soft-tissue tumours. He has over 400 scientific publications and various influential reviews and 23 chapters of books to his name. Prof. Hogendoorn has held a number of national and international offices at scientific organisations. Currently he is chairman of the Netherlands Committee for Bone Tumours, a member of the knowledge coalition for the Dutch National Research Agenda, chairman of the Bone and Soft Tissue working group European Society of Pathology, chairman of Education and Training (O&O) at the Netherlands Federation of University Medical Centres (NFU), and chairman of the League of European Research Universities (LERU) Policy Group in Biomedicine.

Prof. Hogendoorn was a member of the advisory board of the prestigious Journal of Pathology. He held the same post for Diagnostic Histopathology and Hereditary Cancer in Clinical Practice. Prof. Hogendoorn is still an active member of the working group of bone and soft-tissue tumours of the European Society for Pathology and the United States Academy of Pathology. Because of his research and diagnostic work in the field of bone and soft-tissue tumours, the World Health Organisation (WHO) asked him in 2002 to join the working group for the classification of these tumours. As such he was a co-author of the WHO classification for bone and soft-tissue tumours and was in 2013 appointed editor of the most recent edition.

Pancras C.W. Hogendoorn is an honorary member of the Belgium Society of Pathology. He received the European Oswald Vander Vekenprijs (2008), the Corrine Farrel Award of the International Skeletal Society both in 1994 and in 1998, and the Jeremy Jass Prize for excellent research in the field of pathology in 2011 and 2015.