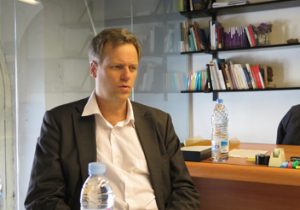 The Eurolife Autumn Symposium took place on the 24th and 25th of October, and was organized by the University of Barcelona, the Institute of Neurosciences of the UB and the master’s degree in Neurosciences.

Researcher Per Svenningson, professor from Karolinska Instituet (Sweden) was awarded the Eurolife medal, and gave the final conference of the ceremony.

Per Svenningsson is a neurologist specializing in the neuropharmacology of movement disorders such as Parkinson’s disease. He is a professor of neurology at the Department of Clinical Neuroscience at the Karolinska Institutet and in the Department of Neurology at Karolinska University Hospital in Stockholm, Sweden. He is the team leader of a research group that studies the underlying pathogenic process of PD. Svenningsson is also a member of many research councils and committee, including the European College of Neuropsychopharmacology (ECNP).
Svenningsson received his MD and PhD from the Karolinska Institutet in Stockholm, Sweden, where he also completed postdoctoral research. In 2012 he was appointed full professor in the Department of Clinical Neuroscience and the Department of Neurology at the Karolinska University Hospital.
Parkinson´s disease (PD) is a common neurodegenerative disorders with a largely unknown etiology. The next breakthrough in the treatment of Parkinson’s disease (PD) will be aimed at interference or blockade of disease progression, based on insights into the underlying pathogenic process. The development of this new generation of disease-modifying drugs is hampered by the lack of adequate diagnostics and biomarkers that reflects early signs of disease. The motor signs of PD are often preceded by non-motor symptoms including depression, anosmia, REM sleep disorder and constipation. It is important to develop an improved knowledge of these clinical signs of early PD as neuroprotective and restorative therapies for PD would ideally be offered at an early stage to effectively modify disease progression. The laboratory develops cell and animal models to mimic the progressive disease progression in PD. Biochemical, histological, pharmacological, molecular biological and behavioral techniques are used in these studies. In clinical studies with patients, clinical ratings, biochemical and imaging (PET and MRI) analyses are being made. A special emphasis is placed on non-motor symptoms of PD and the identification of biomarkers. The information is transferred to a newly developed PD quality register. The research team also studies the pathophysiology of unipolar depression in animal models as well as in patient samples. In addition to PD, other movement disorders including Huntington’s disease and ataxia are studied.
In addition to research and teaching, Svenningsson holds a number of positions of trust. He was a former grant reviewer for INSERM/ANR in France. He has been on the reviewing committee of the Finnish Medical Research Council, the Swedish Parkinson Fund, and the Norwegian Medical Research Council. He is a member of the Ulf von Euler Lecturer committee and a councilor on the Executive Committee of the European College of Neuropsychopharmacology (ECNP).
Among Svenningsson’s honors and awards are the NARSAD Young Investigator Award (2007), awarded to promising young scientists conducting neurobiological research by the Brain & Behavior Research Foundation. In 2008 he was awarded a researcher position at the Royal Swedish Academy of Sciences.

We had the chance to meet him and talk about his field of research and his views on the Eurolife network.

Which are, according to you, the strengths of the Eurolife network?

I think collaboration in Europe is very important and I believe the idea of the Eurolife network is good, we can share resources. It is difficult for all of us to have the necessary infrastructures and staff to carry out this kind of projects and therefore the idea of European collaboration is necessary.

The UB has an Institute of Neurosciences, which gathers researchers from different areas of knowledge. There are researchers working on the understanding of the central nervous system in different stages, ranging from neurobiology to the creation of neural circuits, and the global function of the brain. It was set in 2015 to highlight the research on neurosciences at the University of Barcelona and to promote synergies among disciplines which had been working separately. Do you think these organizations or structures are interesting?

Indeed. I am actually an example of of multidisciplinarity. I work within the clinical field and control my patients, but I also carry out a basic research which is relatively competitive. Collaboration between different areas is very important to be competitive and produce new knowledge. We create a lot of data in the clinic: patients’ phenotypes, their symptoms, markers… Bioinformatic handling of these data are very advanced and therefore it is important to work on it from a computational perspective. I also work with biophysicians who develop advanced imaging technology.

Which are your current research lines?

In the laboratory we try to understand the function of receptors, mainly protein G coupled receptors, we study how they send signals inside the cells. We work on serotonin receptors, but we are also working on other new receptors such as the GPR37, which we think might be important in Parkinson’s. Regarding this receptor, we are planning to work on a project with Professor Ciruela, to start collaborating in the Eurolife network.

Over the years, I have also focused more and more on diseases. I used to work on depression but I am now working more on Parkinson’s disease, and I do so in the clinic too. Actually, these two are related, because around 30 % of the patients with Parkinson’s disease also suffer from depression.

Which is your major contribution to this field?

Regarding depression, I will present a study on a protein we identified, called p11, which is important in the regulation of certain neurotransmitters and in particular, on the effects in animal models in the selective serotonin reuptake inhibitors (SSRIs), the most used antidepressant agents. We are also seeing changes in p11 in humans, in the brain tissue of patients with depression.

Regarding Parkinson’s disease, the most important thing we have done so far is to identify a new potential treatment for dyskinesia that appears as a side effect of Levodopa (treatment for motor symptoms).

One of your main research lines revolves around Parkinson’s disease, a known and spread disease nowadays. How would you explain this disease to a patient with Parkinson’s or a close family member? What happens inside their brain?

This disease is considered a movement disorder and it is diagnosed based on the motor phenotypes. We have symptomatic treatments for these motor dysfunctions so we can help patients for at least five to ten years, after this time complications come up.

However, although Parkinson´s disease is a movement disorder, the disease affects many brain functions. Patients suffer from other symptoms which we do not comment on that much –such as sleep disorders, depression, dementia, constipation and susceptibility to stress. Unfortunately, these non-motor symptoms do have fewer treatments at the moment.

When I explain the motor symptoms of this disease to the patients or family members, I make an analogy with diabetes. In the same way I say there is less insulin in diabetes, Parkinson’s has lower levels of the dopamine neurotransmitter and the treatment replaces them in a different way. 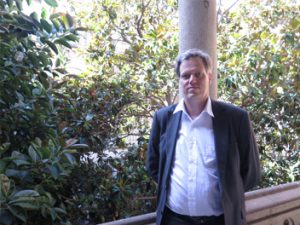 Which elements allow an early diagnosis of diseases such as Parkinson’s? Why is it important to detect the premotor symptoms?

There are four premotor symptoms in Parkinson’s. One of them is the called REM (Rapid Eye Movement), and it is a sleep behaviour disorder. When you are under the REM phase your brain is very active, but there are mechanisms that loose the muscular tone and prevent the body from making sudden movements during your dreams. Patients with this disorder have unusual behaviours during nightmares, there is no muscular relaxation, the patient is very active, s/he even screams or moves in an aggressive way. People suffering from this disorder have a 20 times higher risk of developing Parkinson’s.

Another common premotor symptom is the loss of sense of smell, or hyposmia. The third is constipation. I think it is still a bit speculative, but some researchers think Parkinson’s disease starts with the gastrointestinal tract and then, through the vagal nerve, it goes up to the brain. There is some evidence on that.

The fourth symptom is depression, people with depression have a higher risk of suffering from Parkinson’s, it may be one of the premotor symptoms. Early depression in patients with Parkinson’s disease is probably quite based on neurochemistry; they have lower levels of dopamine, serotonin, noradrenalin…  At later stages, depression is more reactive to a tough disease state.

The big problem is that we do not have any treatment to slow down this progression; we only have a treatment for the symptoms. In some way, it is good to start treating symptoms before to get a better life quality, but unfortunately, it does not affect the development of the disease.

Nowadays there are many trials to find therapies to slow down the development of the disease, and as soon as there is a clear finding, I think it will be very important to have the early diagnostic and early treatment.

An example of a neurological disease for which this was found was multiple sclerosis. There are new treatments that can slow down the disease and that is great for the patients. We hope to see something similar in the future for Parkinson’s disease.

Would that be the biggest challenge in the long run? What other challenges are there when it comes to the research on Parkinson’s?

Yes, the biggest challenge is to find a treatment to reduce the progress of the disease. Another challenge we must have in mind are the non-motor symptoms, such as depression and dementia. When we make questionnaires about the life quality of patients, they give more importance to the non-motor symptoms than the motor ones. Therefore, we cannot leave behind the research on specific treatments for these symptoms.

And now, let’s talk about you. Tell us, when did you start being interested in neuroscience?

Actually, it was a professor of Pharmacology in the Karolinska Instituet, Bertil Fredholm. When I was a medicine student, I found his lectures and research very interesting, so I started going to his laboratory during the afternoons and holidays. We worked on the role of adenosine receptors in the effects of caffeine.

And which advice would you give to someone who is thinking about doing research?

I think it is very important to find an area in which you are really interested, because research is very exciting and fascinating but it also involves hard work and is a tough career.

One of the perks of being a researcher is that you can travel a lot and people are very friendly. As a researcher, you collaborate with European colleagues and with the rest of the world. I think this is good for yourself and you can learn a lot as a scientist, you discover different cultures and views, it is enriching.